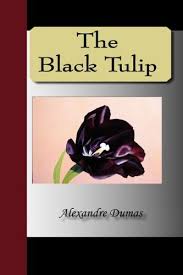 The Black Tulip Book Summary- written by Alexandre Dumas
The Black Tulip, a novel set in Holland in the 16th century, tells the story of how Cornelius van Baerle, a tulip fancier who was wrongfully accused of treason and imprisoned for life, found his true love in the midst of so much adversity. Cornelius had been entrusted an incriminating document by his godfather, Cornelius de Witt, former Grand Pensionary, which he hides among his most precious tulip bulbs. But an envious neighbour, Isaac Boxtel, whose small tulip garden was eclipsed by Baerle’s, bears him a fatal grudge. Boxtel guesses that the document given in secret to Baerle would destroy him, and so he informs the authorities at a time when passion against the De Witts ran high. The magistrates find Baerle guilty – only the note addressed to him by his godfather showing he was not aware of the documents’ contents could have saved him – and sentences him to death. An hour from execution, Baerle entrusts to Rosa Gryphus, the jailer’s daughter who had been very kind to him, his precious secret: three tulip suckers which would produce the coveted tulipa negra – the black tulip. At that time, the Horticultural Society of Haarlem offered a prize of a hundred thousand guilders to any person who could grow such flower. By painstaking, exquisite cross-breeding, Cornelius had succeeded in developing three bulbs which would ultimately yield the black tulip, and these he bequeaths to Rosa through a will written on the page of the Bible where the late De Witt’s exculpatory message to his godson had been written, though unnoticed. To the dismay of Boxtel, Cornelius escapes death by executive clemency granted by Prince William of Orange, who harbours remorse at having caused the death of the De Witts.

Cornelius is taken to the fortress of Loewestein to be imprisoned for life. By taming some pigeons in his cell, Cornelius succeeds in informing his old nurse, who in turn informs Rosa of his confinement. Rosa appeals to the Prince that his father be transferred to Loewestein, which is granted. Rosa comes to Cornelius’ cell in secret every night, and they become lovers. Meanwhile, she is taught to read and how to grow the black tulip. The first bulb had been destroyed by Rosa’s father, the second is planted by Rosa inside her room. At last it produces the black flower, but before Rosa could take it to the city to claim her prize, it is stolen by Boxtel, who had penetrated the fortress in the guise of a suitor. Rosa follows Boxtel to Haarlem and disputes with the President of the Horticultural Society the ownership of the black tulip. By a stroke of fate, the Prince appears and hears Rosa’s story. She shows them the third bulb which was entrusted to her by Cornelius, still wrapped in the note of his godfather. Having been taught to read by Cornelius, she notices the letter and shows it to the Prince, who is finally convinced. By order of the Prince Baerle is released and taken to Loewestein where she marries Rosa. This novel appears to be a precursor to the author’s more famous work – the Count of Monte Cristo, which has a somewhat similar plot.